Tournament Templates is where you will rig the name, entry behavior, prize payouts and notifications for an event.

When modifying an existing template, the Apply / Save & Close buttons will take effect at the start of the next tournament. This preserves the existing values for users that are already enrolled in the tournament in a live setting.
If you need to modify the existing data for a live tournament, you can select the Apply to Live Leaderboards (Danger) button, however, this may have adverse effects on existing enrollees of the tournament, resulting in customer complaints. (Not recommended)

When Adding a Template there are four sections to fill out: 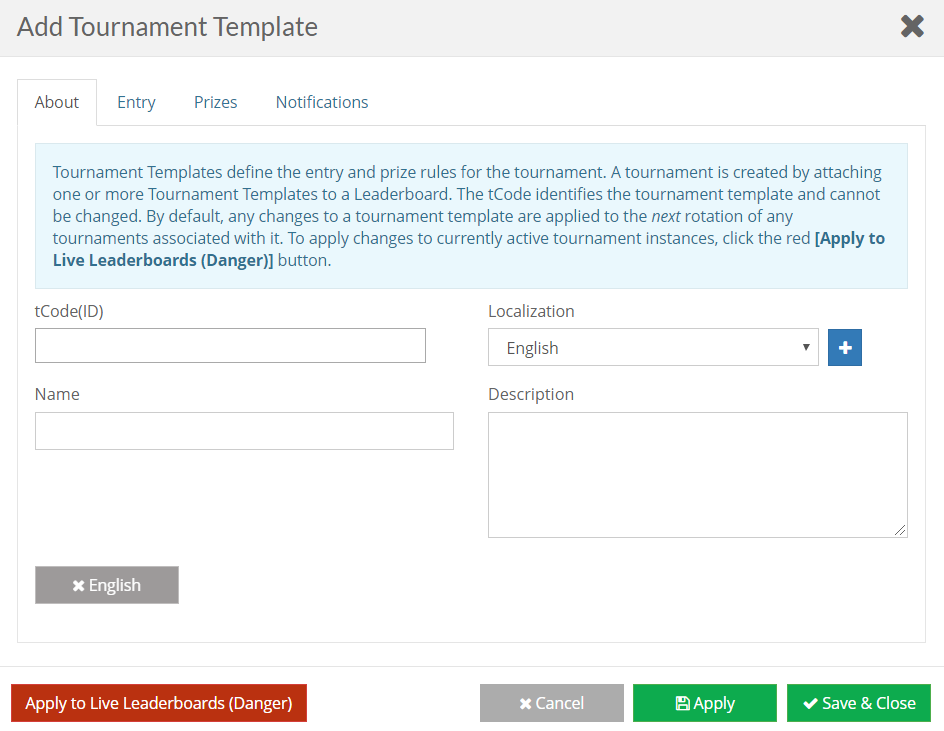 tCode(ID) - Enter a developer-facing string with no spaces or special characters to identify this tournament. It's a good idea to include the keywords to help you identify the Tournament by tCode without referring to this page.
eg. WeeklyTotalScore or DailyTopScore

Name - Enter a User-facing name for the tournament. The design may wish to use a title that is similar to your tCode but with spaces and capitalization as per your style, but this is up to your creative team to decide.
eg. Weekly Score Rush or Daily Dash

Description - This is a good field to use to enter the user-facing directions for the win condition. It is recommended to use a short description to accommodate text display concerns in your app.
eg. Every round adds to your score. Highest total Wins! or What's the highest score you can earn in a single round? Top scorer wins!

Localization - Select any additional Localizations for this tournament as needed.

After entering information for these fields, it is recommended to press Apply before advancing to the next tab. 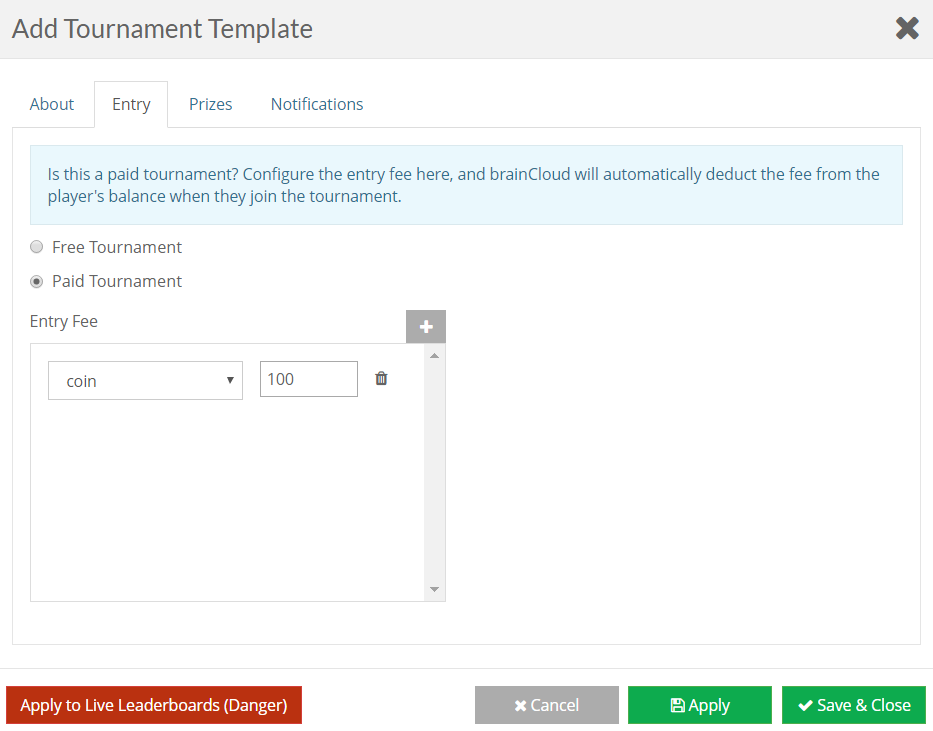 Free Tournament
A benefit of running a free tournament is that you may select Auto-Join in the  Design | Leaderboards | Leaderboard Configs | Tournament Periods | Tournament panel. This ensures a high participation rate and may help your design surface both the tournament concept in general AND a sense of competition to your users to drive further engagement.

Paid tournaments can have an entry cost of any combination of currencies. This allows you to create interesting offers for your players, such as selling Tournament Ticket packs or making additional hard currency sales in exchange for a skill-based chance of accelerated player progression.
Select the [+] to add the entry cost(s) for this tournament.

After entering information for this section, it is recommended to press Apply before advancing to the next tab. 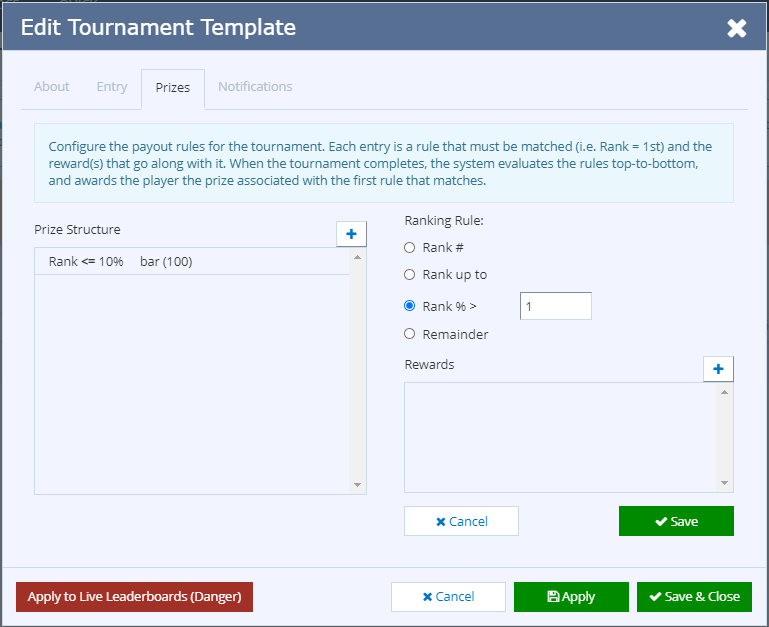 Prizes are a major way for Tournaments to incentivize engagement in your users. Additionally, prizes affect your app economy, so your Design team should carefully balance what level of mastery the user needs to demonstrate for a given payout.

The Prize Structure lists all the prize tiers for the given tournament. Prize payouts are paid in order from top to bottom, and if a user already won a prize, they do not win another prize for a lower rank. Each user in a given Rank will be paid the amount listed.

Select the [+] on the Prize Structure tab to add a new Rank to pay to.

Rank up to Pays all players with this rank or higher. Good to use for: Rank 10 and up in a Tournament with ~50-200 players. Note: Design should use "Rank up to" with caution because it will pay to users with these ranks, even if there are not many players enrolled.
Rank %>: Pays users that finish in the top n% ranks of the tournament. Best to use for: prizes paid to the upper-middle portion of users, such as 10% and up. Also good for 25%, or even 50% and up.

Remainder: Pays all players that did not achieve a higher prize. This is best considered as a token consolation prize so players are recognized for their participation. The payout value should be lower.

Pro Tips for setting up prizes: 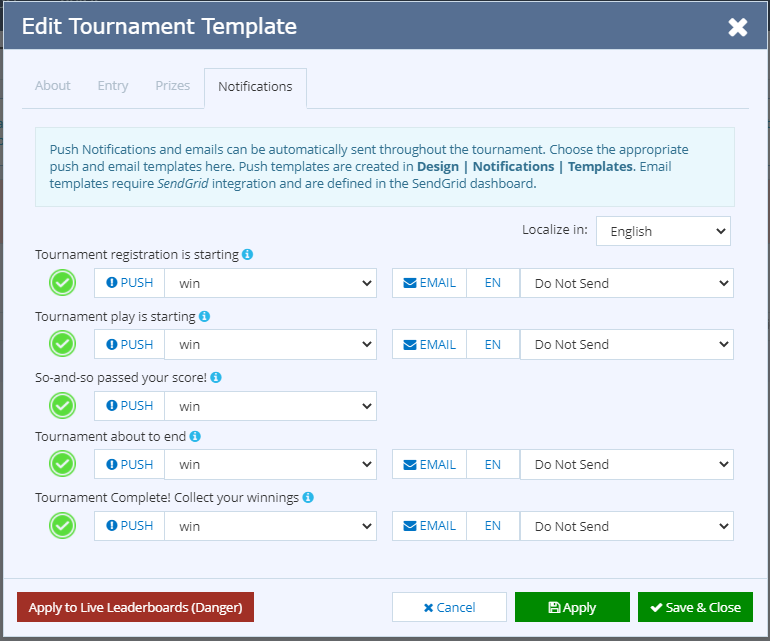 brainCloud can be configured to automatically send Push Notifications or even emails for key events during a tournament.  Use the (i) next to each notification option to learn more about when these notifications are sent.

Push templates are created in Design | Notifications | Templates.
Email templates require SendGrid integration and are defined in the SendGrid dashboard.

Tournament play is starting - Recommended for Tournaments that are a single play-session in duration. (Usually Less than 2 hours long) In this case, missing the start of the tournament would put the user at a disadvantage, so the user is more likely to appreciate a notification.

So-and-so passed your score -  Useful for tournaments that support multiple play sessions, such as a contest that allows participation all weekend (or longer).

Tournament about to end - Useful for tournaments that support multiple play sessions, such as a contest that allows participation all weekend (or longer).

Tournament Complete! Collect your winnings - Useful for all tournaments, in particular tournaments that support multiple play sessions, such as a contest that allows participation all weekend (or longer). Promotes positive user engagement. The design should consider configuring a prize for Rank: Remainder to capitalize on player goodwill.

After completing a Tournament Template, the design should continue on to Design | Leaderboards | Leaderboard Configs to rig the corresponding Leaderboard that will track player's scores and ranks for this tournament.